"Els is very open and honest, and I think that is important." 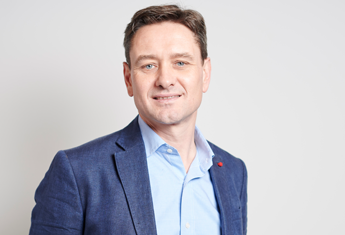 Already early in his career Pieter Dewaele experienced that doing business in France is very different. When the division of his company; "DewaFlexo" - which distributes products and services for the flexo printing industry in France and Benelux - needed a new impetus, he approached Els. "We got on immediately, because of her hands-on attitude and her pragmatic handling of things.”

After completing his studies as a graphic designer near the Dutch border, Pieter Dewaele became a salesman of printing industry products at a Brussels-based company. "Seven years later, one of my suppliers head-hunted me, a German company with more than 1,000 employees. I became an export sales manager for Western Europe. When I wasn’t able to get a small branch in Paris back on track, the CEO in Germany suggested closing the company. However, I knew that if we did this, we could forget about doing business in France for the next 10 years. Instead of closing it, I suggested an alternative by opening a sales entity in the North of France for the French and Benelux markets. This got the CEO’s approval and I was allowed to go ahead with it. Today, we're still getting great numbers there."

“But I wanted more and wanted to start my own company. With my former employer as the first customer, I founded DewaFlex 7 years ago. I was looking for suppliers who wanted to distribute their products on the French market, with me as a commercial agent. But soon organisations like Flanders Investment & Trade (FIT), Voka and CCFB (Chambre de Commerce Franco Belge) asked me to give presentations on the unique aspects on entrepreneurship in France. That is how I came into contact with companies from other sectors. Based in Roubaix, today we do business development in the French market employing 26 people for Flemish, Dutch and German companies, respecting cultural differences.”

For example, we let French college and university students conduct market research for Flemish companies within a system of dual learning. Another example is the case of a temping agency that wanted to address labour shortages in West Flanders by recruiting in Northern France. However, I knew that their West Flemish approach wouldn’t work here. On a part-time basis, two young girls are now recruiting by parking a campervan in the car parks of French job centres (Pole emploi), addressing job seekers. As a result, they get up to 30 candidates per day! In my book: "Affaires met Fransen – Doeltreffend zaken doen in Frankrijk” (“The French Connection - Doing Business effectively in France"), I also illustrate the importance of knowing the French mentality in order to achieve maximum results here."

“I wanted to approach the first meeting the French way: first you get to know each other in a personal way over dinner. But after explaining her own career path, Els was so pragmatic and hands-on that there was no time left to eat.” (laughs) “She started coaching the new representative, but it turned out that he had too little technical affinity with our product, so we had to let him go. To avoid a vacuum, Els spontaneously offered to take Dewaflexo under her wing one day a week, including the accounts. And when it turned out that we did not have a representative for the Codimag printing machines in the Benelux, she followed our French representative for a day and from now on she covers the Benelux sales.”

“The nice thing about Els is that, as a consultant, she doesn’t tell you what to do yourself, but she takes specific initiatives and tackles things like an entrepreneur. For example, she has analysed the different product lines to see where we sell how many. She also came with us to a trade show in Brussels which she had prepared all by herself, she even had the walls of the exhibition stand printed. And when we needed a marketing tool for certain products, she brought several packing boxes to demonstrate all the possibilities. Her approach is never theoretical. Els is also very open and honest, which I think is important. You just always know where you stand, and that is tremendously appreciated.”